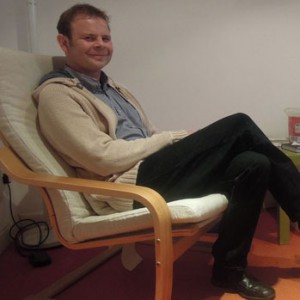 Hayden Kilpatrick knows more about the struggles facing young adults than most parents do.

On a daily basis the 42-year-old encounters everything from exam stress to some of the most harrowing stories of abuse and neglect.

Since joining Leith-based initiative The Junction in 2006, Hayden has helped hundreds of adolescents come to terms with the various difficulties facing them.

But for the senior counsellor, who works with 12 to 21-year-olds in north Edinburgh and Portobello, more people should be reached.

“There’s no other counselling service in Edinburgh like this,” he said. “Other organisations do one-to-one support and there are counsellors in schools. We get phone calls from people in the south of Edinburgh asking to access the service who we just can’t accommodate and that’s hard.

“Word has spread amongst young people that we’re here and that we’re accessible and beneficial. And as that happens our waiting list grows, which shows the needs that are out there and how troubled some people are.

“But at times the waiting list has been up to 12 weeks – that’s an awful long time to wait if you’re a young person asking for help.”

Thankfully, the service, which was established in 2005 by community learning and development worker Sam Anderson, recently received a funding boost of £119,000 to expand.

The money, awarded by the Scottish Sport Relief Home and Away Programme, will enable the centre to provide up to 750 extra counselling places every year, in addition to the health related services, education and support on offer.

“We have drop-in sessions and other services which mean we can support young people in the short term while they wait on counselling. But sometimes a young person will end up saying ‘well I want to see somebody now’ because their life is one of constant change,” said Hayden.

“You need to intervene as quickly as possible so the funding will help us shorten the waiting list period as well as offer young people more counselling sessions.”

He added: “We hear problems ranging from small to massive – every young person who accesses the service is struggling in some way. There can be some quite horrific stories.

“Because of the 12 to 21 age group it’s very varied – somebody who’s 19 or 20 could have been through the system and not had a not so good experience, and their issues could centre around systemic abuse from an early age. It will take a long time for someone like that to be able to find a way of coping with it.

“On the other hand, somebody who’s 12 might have experienced the first instance of some sort of abuse. Counselling is now being recognised as an effective intervention whereas perhaps before it wasn’t – it’s changing, but in my eyes the change is too slow.”

As well as counselling, The Junction offers a range of services from anger management sessions, help with problems relating to alcohol and information on sexual and other health issues.

Designed with a shop front and located on Leith’s Great Junction Street for easy access, the centre was launched in response to Sam Anderson’s report ‘Safe and Sorted? Not in Leith’.

The report found that young people in the area wanted a one stop shop where they could get information on sexual, mental and physical health in an anonymous and accessible environment, as well as being able to talk about their issues.

Since 2005, The Junction’s staff base has grown from four to 12, in addition to a team of volunteers, who offer more than 700 counselling appointments a year.

“We live in an increasingly demanding, stressful world where there’s a lot of pressure put on young people to be a certain way, to fit into certain systems, to be successful, whatever that may mean.

“There’s been a push for more counselling in schools but one of the problems is that not everybody feels they can talk about their issues within a school environment where there’s a lot of pressure put on educational attainment. If your intelligence lies in a different way you might not fit into that system and you might end up feeling isolated.

Hayden, who has worked around the country as a counsellor and on drugs projects, is currently training up new volunteers for The Junction.

“The good part of the job is seeing somebody who, for instance, is self harming or suicidal who, by the end of counselling, has decided they’re going to choose another way of coping, which might be a healthier way.

“That’s one of the reasons I do the job, it can be really heart warming. All figures show that counselling is effective and can be really beneficial. That’s really rewarding – but it can also be tiring, even exhausting.”

Project manager Sam Anderson said she was satisfied the service today reflects the outcomes of her report, written in 2001.

She said: “I was working with older people and thought, if we could counsel young people we could intervene at an early stage. The Junction is a direct response to the report.

“The Sport Relief funding means that we’ll be able to increase the capacity of the service over the next three years. We have a big waiting list – it’s going to help that demand.

“We will continue to work in partnership with young people, listening to their needs and responding to that. The volunteers are absolutely crucial to the work we do, providing young people with a space and somebody neutral to listen and help them explore.”

We are hosting Write To Express taster sessions in October,……read more